I’ve been in love with FREE app Sketch Nation for a while now. Aside from being FREE and working on every device, via an app or the Sketch Nation website, it’s super user friendly and FUN!

The app allows users to create their own versions of simple video games — think Flappy Bird or Super Mario Brothers, but with characters and backgrounds that you draw. I’m a geek, so it’s clear why I would love this app. But what does it have to do with education?

We spend a lot of time talking about communication in education. It is, after all, one of the four Cs. We want students to be able to communicate their thinking. But in the information age, it’s even more important that students find unique ways to make their voices heard.

I try to help my students identify an audience and find meaningful ways to communicate to that audience. Student-created video games give kids one more tool for communicating their understanding and ideas in an engaging manner. Plus, it’s fun!

How does Sketch Nation work? 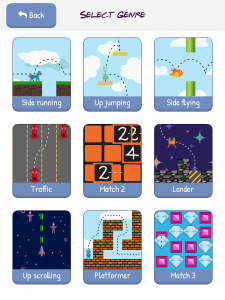 To create their own game, students simply open the app or go to the website. They choose to “create a game” and then select from nine different variations, such as “side running” (similar to Mario Bros.), “side flying” (similar to Flappy Bird) and “up jumping” (similar to Doodle Jump).

In “simple mode,” students can create a basic game in a few minutes. They create a background, a main player, and an obstacle. And off they go. 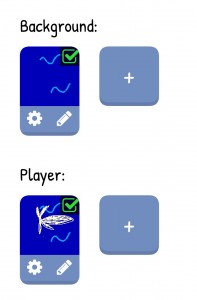 If they select “advanced mode,” students are able to create and edit all portions of their game, including the addition of “powerups” and “enemies.” Their game is separated into different components — background, player, powerups, enemies — and each has a menu consisting of a pencil and a settings wheel. When students tap the pencil, they can edit the look of the component by creating an illustration or adding a photo (which is modified to look rather pixelated — 8-bit-style). When students tap the settings wheel, they can modify the behavior, movements, and size of the component.

If students choose “expert mode,” they can control even more — virtually every aspect of the game. They can set up the game’s levels and control exactly how many of each powerup and each enemy will appear. They can even select where on the level these components will appear.

Generally, I have students start in the simple or advanced modes for their first games. Once they understand how Sketch Nation works, I might allow them to try the expert mode, depending on their goals for the game.

Video games are cool and everything, but what about the content? Actually, educators can make some strong content connections using Sketch Nation. In fact, it is the perfect addition to a unit about food webs.

In such a unit, Sketch Nation could be used in two ways: one is as a culmination activity, after students have learned about a specific ecosystem and its food webs. Students can play each other’s games and help one another iterate until the games are as realistic as possible, given Sketch Nation’s limitations.

The second option is to start a food web unit with students each creating a game. Choose an ecosystem and brainstorm a list of animals that live there. Then, have students choose an animal to be their main “player” and move on from there. As students learn more and more about food webs, the specific ecosystem, and their animal, give them time each week to return to their game and make adjustments to make the game more realistic.

In either scenario, for ocean food webs, I have students create a game using the “side flying” template, as it’s a lot like swimming. I then have them use “advanced mode,” as it gives them enough options to create a food web but isn’t too overwhelming — they’re able to create their first draft of the game in about 20-30 minutes. 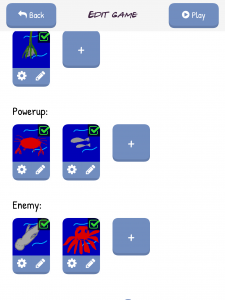 Students choose (or are assigned) an ocean ecosystem, such as the kelp forest, and draw it as the background for the game. Students then illustrate a main “player,” who is in the center of a complex food web in that ecosystem. For example, a squid. Then, students draw the animal’s predators (called “enemies” in the app) — such as an octopus and a fisherman. Next, they create the animal’s food items (“powerups”), like crabs and sardines.

In the advanced mode, there are obstacles referred to as “pipe top,” “pipe middle” and “pipe bottom.” Generally, I have students uncheck these pipes so they don’t appear in the game. However, depending on the ecosystem, you might allow students to choose to change these obstacles to trees or rocks.

Teachers can challenge students to make their game the most realistic representation — they can add multiple “enemies” and “powerups.” (I’ve seen some students add various man-made pollution to the “enemies” category as well.) If students try the “expert mode,” they can control the number of different animals in the ecosystem, to make their game more reflective of actually biodiversity data.

Obviously, this food web representation has its limitations — a squid isn’t going to immediately die every time it touches an octopus. And some animals (like, for example, sea urchins) don’t move through the water as they do in the app. But these are great discussions to have with students. I ask them to talk with a partner about ways they tried to make their game more realistic, suggestions for ways they could make it even better, and limitations that cause the game to be unrealistic, no matter how many changes they make. These discussions connect directly with the Next Generation Science Standards, which encourage students to identify the limitations of man-made science/nature representations.

Beyond food webs, there’s other potential for Sketch Nation in classrooms. If you have older students able to understand the complexities of war (and not focus too much on the competition aspect of gamifying a war scenario), they could re-create battles in wars they’re studying. For example, in the American Revolution, students could illustrate a generalized American soldier or a specific historical figure (like George Washington) as the main player. They could add resources such as food and medical supplies as powerups, and they could create various British soldiers as enemies. Of course, you’d want to have a discussion about the word “enemies.” Invite some students to create their game from the perspective of a British solider or a Native American, prompting further class discussion about perspective. Students could even illustrate a background based on their studies of, or field trips to, historic battlefields.

Students could also create a game as a book report. Katniss Everdeen could run through the Hunger Games arena, as described in the book, avoiding tracker jackers and tributes with their specific ammunition, as she tries to find water and food.

What other ideas do you have for incorporating Sketch Nation (or other game design apps) in your classroom? Share them in the comments!